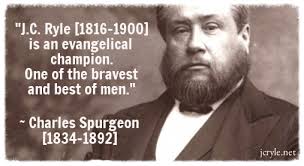 One thing to note is when this was written.  John Charles Ryle lived from 1816 to 1900.  Our considered work was published in 1879.  This was about the time that Charles Finney was transforming the way we did church.  Finny was the one whom is credited with “The alter call”.  Now I am no expert on Finney, but what I have learned is that he utilized showmanship and emotional theatrics to gain converts.  Numbers are what mattered.  Thus today we see many of the same devices employed for the appearance of the activity of God.

Let me go on record to say that I am not dismissing the alter call, just critiquing it.  I believe that an alter call may have its place.  But what is rather to be preferred is the puritan means of “Inquirery”.  Inquirery was an extensive visit of the minister to the home of the parishioner.  Here the minister would have scheduled time, often two hours or more, to inquire of the spiritual condition of the home and to allow the members of the home to ask direct pointed questions.  It was not rushed.  It also revealed the consummate nature of spiritual urgency.  A minister was afforded the time to ask pointed and specific questions.  Typical Sunday school answers would not suffice.  Thus the result was often either the making of true disciples or clearly leaving the unconverted with an unquestionable understanding of how the scriptures applied to their condition.  Thus my critique of Finney is that he closed the deal quickly and the seed of the word that was sewn was upon the rocky soil at best.

That being said, let us turn again to what Ryle teaches of evangelism.

The defects of the theological system I have in view appear to me to be these: (1) The work of the Holy Ghost in converting sinners is far too much narrowed and confined to one single way. Not all true converts are converted instantaneously, like Saul and the Philippian jailor.

I would agree.  Many people it seems come to Christ in a gradual progression.  In our church we have a woman who can not point to a single moment when she can say was definitive.  She simply says that she knows the Truth that sets her free.

(2) Sinners are not sufficiently instructed about the holiness of God’s law, the depth of their sinfulness, and the real guilt of sin. To be incessantly telling a sinner to “come to Christ” is of little use, unless you tell him why he needs to come, and show him fully his sins.

Here is my largest agreement with Ryle.  When I “was led to Christ” as a young child it was a quick sale.  I did not understand about holiness to any degree.  I just wanted a “get out of Hell free card”.  I then went about with a notion that I was saved, could not lose my salvations, and could freely sin.   I had no idea of the real guilt of my sin, and thus no real understanding of the glory of Christ or the cross.  I was nearly through seminary before making this discovery.  It also wasn’t until years later that I even went to a greater depth in this understanding.   I have missed out on so much worship and knowledge of God, sinned aggressively, all because of a liberal doctrine of sin and holiness.  Too often I saw God loving me because I was loveable, after all He died for me right?  I did not understand that He died for me based on whom He is , no on whom I am.

We must make this clear.  We need to know our sin.

Let us look at it this way, by helping the sinner to see their sin it causes them to recognize the discrepancy between themselves and the holiness of God.  Thus then they see the value of being saved.  In America today we fail to see our depravity because “we are rich and have no need”.   We give little regard to God because we find “fulfillment” in self esteem and its antecedents.  If there were any area I would personally love to have developed within me it would be the understanding of my sin and His holiness.  For too long I did not have this taught to me.  Thus my years of “being a Christian” were characterized by creating theological dodges of responsibility or culpability with ever sermon I heard or dilemma that I came to.  But when we have no recourse in the sight of His holiness we become like Isaiah crying “Woe is me”.

Goran's layout adjusts itself depending on the device you are using. This means your site will look good not only on laptop browsers, but also on devices with smaller screens, such as the iPad and the iPhone.